Staffing a booth is fun, but not nearly so much fun as designing and building it. (And taking it down is hell, but that’s another story)

Having exactly ONE art fair under my belt, I’m not gonna suggest that I’m an expert at booth design or management. Terry Belunes and I took our new artfair booth out for a test run last weekend at our first show; we were pleased with the results, but found lots of room for improvement. Don’t take this as showdesign gospel, but the following is booth design from a newbie perspective. I welcome ALL suggestions and helpful hints.

For this show, we were assigned a 5×10 foot space right by the show entrance, in the corner. The booth was supplied with 8-foot tall pipes making a wall, covered by white drapes. We were given a choice of pipe on two sides of the booth with a diagonal extension across the top, or a fully squared pipe “room” with a post at the exposed corner.

We chose the diagonal arrangement, above right, to give us the most open-looking space and make it easier to reach things with our lights.

That done, we went looking for display ideas. Most of our work was tabletop and mine (cast crystal) could weigh up to 45 pounds, so our shelves needed to be sturdy. The entire setup, plus artwork, needed to be transported in two cars and an SUV and easily set up, art and all, in a three-hour window. Since this was our first show, we also didn’t want to spend a heckuva lot of money.

I reviewed everything I could find online (Luann Udell’s notes on booth displays were incredibly helpful). My friend Becky, of Fireborne Creations in Glass, suggested a store display salvage shop, Portland Store Fixtures. It carries just about anything that might have been used in a retail display, and that’s where Terry found our shelves.

They’re used, 12 inches deep, 2 feet wide and about 60 inches tall, with five quarter-inch glass shelves set eight inches apart. They come apart with the removal of four side struts and eight screws to fold down flat. Best of all, they cost just $35 each, with glass.

We bought five of them during a 25% off sale. Total price: $131.25. We also bought five extra glass shelves, which turned out we didn’t need. 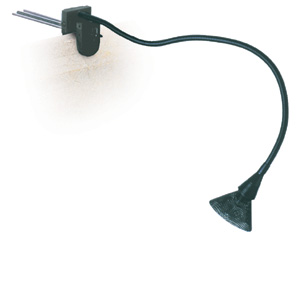 Lighting was the next big thing; Luann suggested MR-16 halogen gooseneck clamp lights instead of the usual tracklights (I’ll let her explain why). We determined that we needed seven, for almost $90 apiece.

I hunted around and found them online for about half that price, including bulb, total cost with shipping $311. The clamp included a round cutout for a tradeshow pipe, so we were set.

These lights have transformers on the end, so we opted for powersquid instead of traditional powerstrips. We already had the extension cords.

We had shelves, we had lights, we had power. Now for the floor: I’ve covered too many tradeshows to want to stand on a bare concrete floor for three days, and I know how nice it is to step into a cushy-floored booth. I wanted flooring, by gum. I found 2×2 foot interlocking squares of shop floor mat in exactly the dark silvery grey of our shelves at Harbor Freight: 4 squares for $12. Bingo–I bought three packages; turned out we only needed two.

We also needed storage for extra stock, bags, bubblewrap, pens, cleaning supplies, etc. Terry found some nice woven boxes that would fit under our shelves at Storables (sorta like this one but taller), but by the time we got there they weren’t available. Everything else was too wide, too see-through or too expensive.

In the end, Carton Service, the local box and bag salvage place where I buy shipping materials, yielded five perfectly sized book boxes for 85 cents each. I spray-painted them black and they looked surprisingly nice, if a little homemade.

We brought our own chairs instead of renting them from convention services, which turned out to be a mistake. Their chairs would have been far more comfortable and better-looking, and would have been two less bulky items to transport.

We still needed more storage, though, and our “showstoppers” were far too heavy for our bargain glass shelves. Terry bought a sheet of quarter-inch acrylic (left) to bolster a weighty steel-and-crystal piece, but we needed sturdier solution that could also get our chairs out of the way when needed.

I finally bought two sheets of cheap plywood and constructed identical 22x18x36 inch boxes. We stapled on a cheap black plastic tablecloth, then topped both with a salvaged silver tabletopper and sheet of glass. They combined to make a surprisingly nice looking pedestal that could support a lot of weight. They also held bubblewrap and all sorts of useful stuff, and with our poster became our primary signage reaching out to passing crowds.

Interestingly, our pedestal/boxes turned out to also encourage browsers inside the booth. We stayed on the other side of that pedestal most of the time, outside the booth and almost behind the shelves, which seemed to reassure browsers that they were safe from high-pressure sales tactics. We only came around if they signaled for help. Inside the booth, our silver tabletopper hung down as a curtain to hide storage.

Those two boxes were also hugely bulky and made it impossible to fit everything in our cars (something I should have thought of). We finally rented a U-Haul truck to get it all down to the convention center, which cost about $30.

I made two 24×36 posters for our signage, both depicting professionally shot work. I kept it simple: Our names, the image and a tagline for each artist. Kinkos printed them onto laminated stock for about $60, stuck two grommets in one so we could hang it from the top of the booth for about $2, and that was that. It would probably have been cheaper to shop around for a better price, but this was literally a day-before-the-show effort and they were fastest.

Ed and Donna LaPlante, booth veterans from ConfusionArt Studio, suggested a number of things, including a “show kit.” I wish I’d listened more closely to all their suggestions, but thanks to them we did bring huge quantities of zip ties, which were invaluable for stringing shelves together, securing cords to poles and just generally pulling things together. We used a roll of gaffer tape (which is amazingly expensive) to secure stuff to floor, walls and our pedestals.

They also suggested we do a “dress rehearsal” of our booth which turned out to probably be the best suggestion of all. We set up the booth in my dining room and immediately discovered that our carefully designed graph-paper plan didn’t work–we had far too much furniture in the booth. After removing some stuff and rearranging others, we came up with the plan we actually used.

As a result, on setup day the booth went together surprisingly quickly, leaving us plenty of time to arrange the displays, which was fun. There are a number of things I know to bring for next time, though:

And, biggest issue of all: Our booth looked good, but it was far less portable and much more breakable than it should have been. We transported 31 heavy, fragile glass shelves in our “show kit,” which had to be moved in small bunches. We had one of the smallest booths, but it was probably one of the heaviest and most difficult to take down and transport back home.

I noticed that few of the more experienced vendors used glass shelves; I now know why. I can’t argue with the price of our shelf solution…but we may need to invest in acrylic shelves or something to get the transportation weight down.

Show veteran Nancy Goodenough has suggested a slightly different arrangement, and we’re considering a wall/pedestal display for larger booths. Both of those ideas need investigating. Overall, though, I’m happy with the setup. We have a lot of tweaking to do, but I think it was a good start.

By the way, if you want to read this entire series on the show, check out these links: